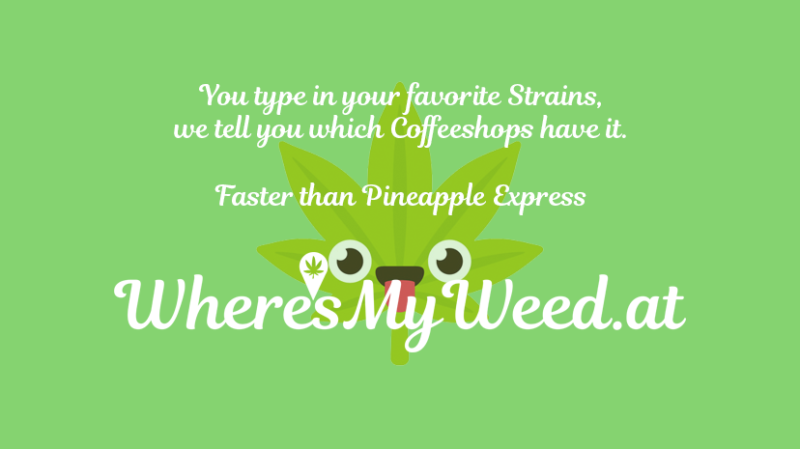 We have always been passionate about the cannabis culture in general. But it has been more from a fan point of view(read: it’s always 420 somewhere right?). We never knew the importance of contributing to the culture or even building a startup in this industry. That is before we saw this documentary from CNN and the ted talk from Josh Stanley.

From that point on, we knew we have to push the culture forward so everyone who needs this magical plant for medical and/or recreational purposes can get the weed they need legally. And that is our vision: To help you find out where to buy the weed you need legally in just a few clicks. Also, we think there has to be a paradigm shift in how weed consumption is perceived by the society. That is why we decided to build a „high“ performance website, which is very easy and fun to use.

So here we are just 4:20 minutes after we launched Wheresmyweed.at and we hope you can find this website useful for you. Currently, we only list coffeshops in Holland but we are preparing the data from dispensaries across the U.S. as we are writing this post. The website will be updated with new features regularly but if you have any wish for a feature you need, don’t hesitate to drop us a line at Facebook or Instagram.

This website uses cookies to improve your experience while you navigate through the website. Out of these, the cookies that are categorized as necessary are stored on your browser as they are essential for the working of basic functionalities of the website. We also use third-party cookies that help us analyze and understand how you use this website. These cookies will be stored in your browser only with your consent. You also have the option to opt-out of these cookies. But opting out of some of these cookies may affect your browsing experience.
Necessary immer aktiv
Necessary cookies are absolutely essential for the website to function properly. This category only includes cookies that ensures basic functionalities and security features of the website. These cookies do not store any personal information.
Non-necessary
Any cookies that may not be particularly necessary for the website to function and is used specifically to collect user personal data via analytics, ads, other embedded contents are termed as non-necessary cookies. It is mandatory to procure user consent prior to running these cookies on your website.
SPEICHERN & AKZEPTIEREN